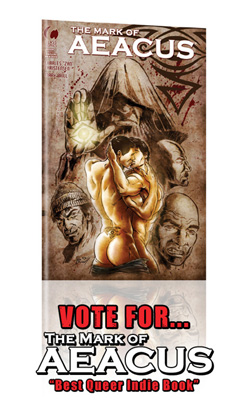 The 2008 QUEERIE awards are on, and we’re very proud announce that Class Comics’ THE MARK OF AEACUS has been nominated in the “Best Queer Indie Book” category.

This is such a big deal for all of us at Class Comics and we want to thank all of you who wrote in to the Comic Book Queers to nominate The Mark of Aeacus!

It’s time to cast your vote folks, and I urge you to follow this link and vote for AEACUS!!!

This is a great honor for all of us involved in the book because the issue is nominated alongside some really top notch material.  Being nominated is an amazing pleasure in itself.

As most of you know, Aeacus is Class’ first book in a new line of titles which feature Gay characters and situations, but that don’t depict hard core sexuality.  We’ve been planning several other new titles in this vein, but in a way, Aeacus was the “pilot” for this wave of books.  To see it receive such acclamation is truly heart-warming, and proves to us that there is indeed a demand for its kind of material.

So please go and vote, my friends!  You can make sure that Aeacus comes out on top!