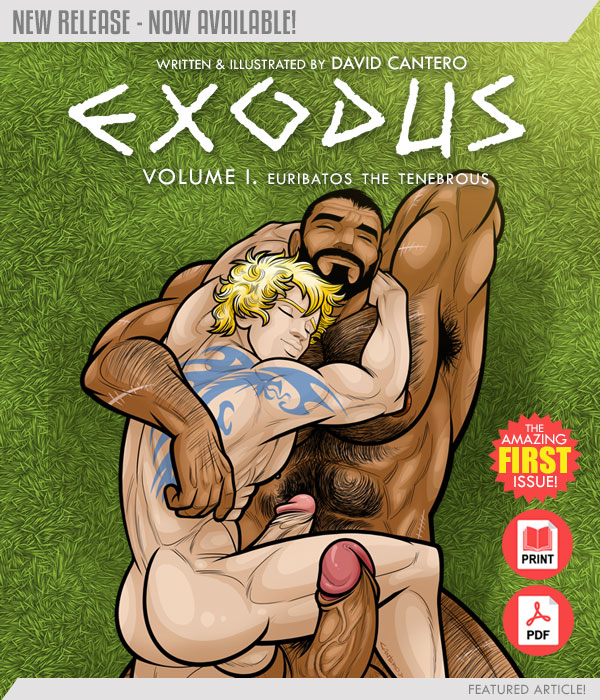 EXODUS Volume #1 “Euribatos the Tenebrous” is now available in Print and Digital comic formats, and is also available in French and Spanish language digital editions.

NEXUS is a young planet in a far away galaxy, divided by it’s opposing deities. For centuries, KIONA the mother goddess has kept the balance between all other divinities. Each god protects a city in the 7 continents of NEXUS.

Now the unthinkable has happened. KIONA has disappeared and all the other gods are trying to take control of NEXUS, starting a war all over the planet.

When EURIBATOS the mercenary crosses the DELPHOX region, he meets the beautiful ALCYONEUS who has been sent to his death to calm the rage of SIBARIS, an evil dragon who terrorizes the city. They fall in love immediately and because of that, EURIBATOS makes a decision that will change the destiny of the entire planet.

This is the beginning of a great adventure, full of magic, fantasy, science-fiction, love, action and sex. The NEXUS universe is just beginning to unveil its unlimited wonders.

Written and illustrated by David Cantero, EXODUS #1 is the first volume of a long and epic series that will delight you with its amazing creativity.

More dramatic than any other David Cantero series, there are still some very funny moments between the action. And, of course, EXODUS #1 is brimming with a lot of HOT scenes!!!